I've a pocket full of dreams to sell

"I've a pocket full of dreams to sell.
What d'ye lack? What d'ye lack? A dream of success--a dream of adventure--a
dream of the sea--a dream of the woodland--any kind of a dream you
want at reasonable prices, including one or two unique little
nightmares. What will you give me for a dream?"
— L.M. Montgomery (Emily Climbs)

As many of you beloved readers know:  I like quotes.  I realized recently that this is not a new thing.   May of 1997 - I would have been.........15 years old.  Ah, so right at that awkward teenage time where you are really not sure if you are yet an adult or still very much a child.  I started a book.  I suppose it could be called a journal.  But only one entry in it is actually mine. Perhaps I shall share it with you someday.  All the rest is simply lyrics of songs and quotes from books.  Ones as deep and moving as "But all the wickedness in the world which man may do or think is no more to the mercy of God then a live coal dropped in the sea."
(M. L'Engle) and as simple and cheery as "time flies like an arrow, fruit flies like a banana."  All words for different times.  I think I averaged about 4-5 entries per month over the span of 4 years.  My last was late 2000, I imagine I left the binder at home as I went off to college.  I picked up that book again this afternoon.  I was surprised I remembered where it was.  I don't think I have looked at it for several years.

Funny - this book is not a journal.  Yet I can see myself so clearly in those words.  I quoted Madeline L'Engle, Patricia McKillip, LM Montgomery and Cynthia Voight, even my own dad in this book.  Perhaps little by little I shall share bits with you all.  It almost makes me wish I had started this Blog with the start of that book:

"Where hopes and fears, built up by all the years can be put on paper, frozen in time, and remembered forever."

I have no idea where that is from.  Not sure if I wrote it or if I borrowed it.  It sounds kinda LMM-ish...but then I do sometimes.  It ends with:

"Here concludes this book of words.  And while history, unlike mortal pen, does not cease, the records beyond this point remain as yet, unrevealed."

I don't know what that is from either.  But I am fairly certain that one I did not write.  Though I will admit - I got an odd chill writing it just now.  Perhaps I shall request it be written on my tombstone.  Now there is a lovely thought.  Though as I look at it again, it is not really tombstone appropriate as I know very certainly the story that comes after.  Well, I know a glimmer; singing, lots of singing.

Anyhow - on to other things.  My children have been keeping me on my toes lately.  Ayla is VERY 2.  Much more so, I will admit, then Taylor ever was.  See? 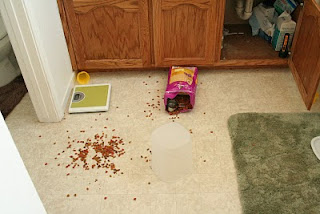 She thought the cat needed food here.  She had just bounded out of the picture herself having been caught.  And here: 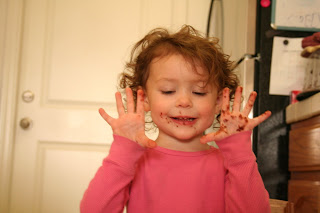 She helped herself to the chocolate chips.  Notice not a bit of regret on that face.  She may know consequences for her actions are coming up VERY shortly but in her mind, it was all worth it!

I have spoken previously of our butterflies.  Taylor named all five of them "Oscar" and "Up"  I suppose five different names for five identical butterflies seemed unnecessary to her logical 4 year old brain.    Well, on a cold and windy morning (as they have all been lately) We let the butterflies go.  To Taylor's delight one of them staying on her finger for several minutes.  Long enough for me to grab the camera and take several shots at least.  I apologize, it was a misty moisty morning and cloudy was the weather....err....there was lots of shadows and glare: 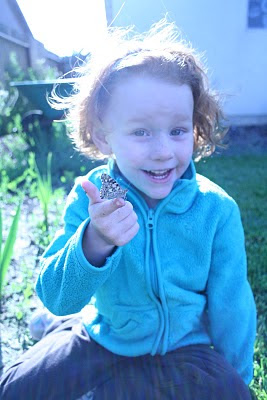 Since then we have seen an orange butterfly once while out for a walk and Taylor still talks of how "Oscar" came back to visit.  I fear we shall be hearing of him for months every time we venture out into our field.  Just look at the utter joy on that little girl's face.  To hold a butterfly, bliss!

My garden is doing simply splendid.  The peas are done and the green beans and cucumbers are barly poking their heads up.  I know I am a bit late, but then the weather has not really been normal this spring so perhaps it wont matter.  But for all those out there that are considering starting a garden yourselves (or for those that already have) let this be a lesson to you!  You know how they tell you to thin the plants once they sprout?  Well.... 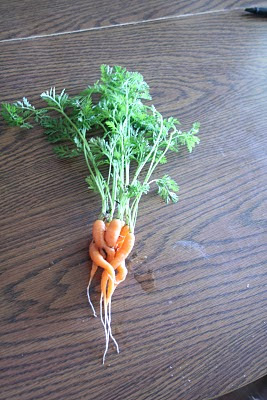 Listen! They know what they are talking about (whomever "they" might be) this is what will happen if you do not head their wise advice.  I should have taken another picture once I took it all apart.  Sad really, but it did make me laugh when I first pulled it up! 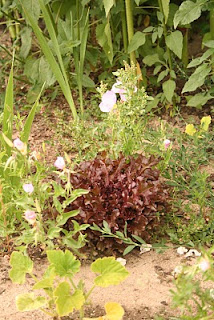 Tell me that is not lettuce growing in between my flowers?  My mom gave me some dirt that she knew contained some primrose roots.  As you can see the primroses grew beautifully.  But this also came up among them.  I believe that bag of dirt also held one lettuce seed.  It is very happy!  Ryan does not trust that it is lettuce and refuses to use it as such.  I know the picture is washed out, but what do you all think.  Lettuce?  Nothing else looks even a smidgen of a bit like it.  And it has the consistency, smell and even taste of lettuce.  I just hate for it to go to waste over the truly small chance that it could kill us if we are wrong.  Ah well. 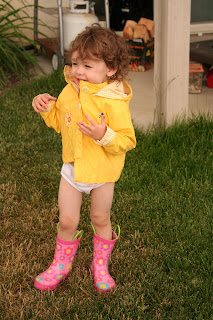 We had an evening just us, daddy was working.  As we were eating dinner it started to rain outside.  Now, as ever small child would; Taylor immediately wanted to run outside in her rain boots and jacket to play in the rain.   But sadly we were not fast enough.  The rain had stopped by the time we got out there and surprisingly, The sun actually came out.  But, not to be discouraged.  Taylor had a brilliant idea.  We made rain! I simply pointed the hose at the sky and we "played in the rain" for a good 20 minutes.  The girls were soaked when they came in, but what better excuse then being cold and wet to take a princess bath?  So a bath they took!  Followed by hot tea with hunny (heehee) and a good long read of 'The Secret Garden' 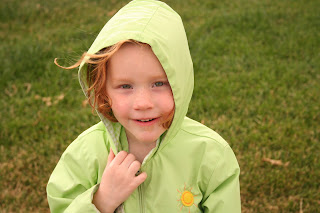 Perhaps someday I shall post picture of my children fully clothed and looking dainty and distinguished?  Though I will admit that rarely happens in this house!

I have discovered something.  I am a better mother in the evenings.  Perhaps it is because I truly am a "night person."  But games and playing I feel incapable of in the morning is just so effortless at night.  I should pay more attention to this, take advantage.  Hmmmm.

Ah, my afternoon is whittling away while I am barely noticing!  Pay no attention to my odd language today and "creative" grammar today.  I am...in a mood and have no time to spell check.  Times like this I write whatever is in my head whether it makes sense or not.  And you, my beloved reader, get to hear it all!

So I end with a story....The sun was shining on the sea, Shining with all his might:
He did his very best to make The billows smooth and bright -
And this was odd, because it was - The middle of the night!

May all your nights be shining and all your days shaped like cabbages!
Posted by SBethuel at 2:53 PM