Next week I will be twenty nine and one half.

Does it make me a word person and not a number person when I spell out the number vs. using the actual numbers?  Hmmmm

When I was a teenager I wanted to get a tattoo. I remember going through all the options. I could get something cutesy like a little turtle on my ankle, or perhaps something that spoke of my love for music or theatre. I considered something "Christian" like a cross or edgy like thorns or barbed wire. I even had a fleeting moment where I considered something trendy like Chinese characters.

Wait...there I wrote the number instead of spelling it. What does this mean!?! Heehee, I like over- analyzing things. It's fun.

So anyhow, I am almost twenty nine and one half (maybe it is the half thing. Harder to understand in number form unless you know how to do the tiny numbers...I don't) Which means I am almost 30 (see?) and I have decided I still want one.

Is 30 old enough to make this decision? I don't really feel much older then I felt at 18.

Anyhow, that means I need to start planning this. I do still want a tattoo, but not a cutesy turtle or anything.  I want one that represents my kids, one that is either highly and beautifully complex, or very simple and elegant.  I want something on either my shoulder/back or my upper arm.  Something I can completely cover up. I don't want it too big, but I also don't want it to look miniature.

I have three ideas so far. 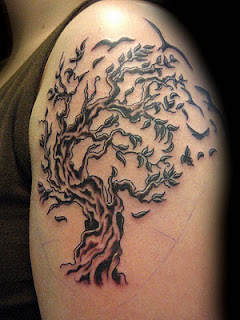 there are a lot of tree tattoo's. But there are not very many tree tattoo's I like. I like a tree because it represents life and friendship to me.  My best friends of all time used to say "a good friend is like a strong tree." And it would be easy to weave my kids names among the branches.


My second idea is cherry blossoms. 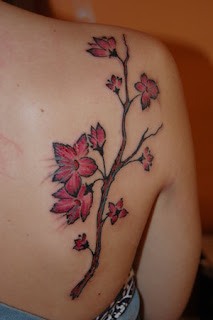 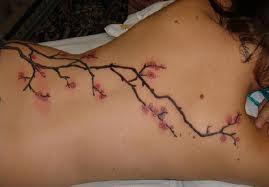 There are also a lot of cherry blossom/apple blossom tattoos to be found (also some trees) and some of these (like the first picture) I like a lot. I like how beautiful and simple it is. But It would be harder to get my kids names in there.

My third idea is a ship. 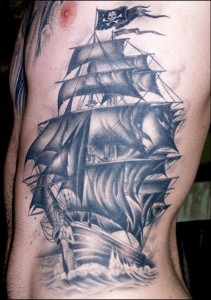 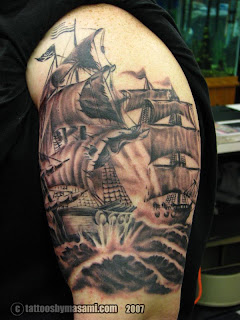 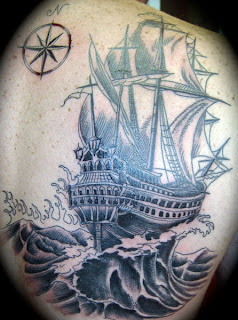 I wrote an entire post on my love of ships just a little while ago.  And again, easy to get my kids names in there. I want the names in there cleverly. Not just written in plain sight. Does that make sense?

I think I need the expert advice and artistic talent of my beloved friend Zinah. Help! I have 6 months to find an artist, design the tattoo and save up for it. Any and all input and advice is appreciated. I have no experience with this so I really don't know what I should be looking for. That is...unless I become to old for it in the next few months. Hey, you never know.  I could bend over and become crotchety overnight. Crotchety old woman don't get tattoos. They are far to mature.

Well, since my baby is awake and this post has been written with one hand I will keep it short...
Posted by SBethuel at 9:40 AM