Of ballet shoes and rainbows

I love real rainbows. I see one and it just fills me with a kid’s excitement all the way down to my toes. Someone asked me once how I knew my Wonderful Amazing Husband was "the one." I can't even remember who asked, but I remember the question. Now, this is a rather cliché question really. I guess there are lots of stock answers; I will let you fill in the generic blanks. But for me, the best way to truly explain it is I wanted to show him a rainbow. You see, when something is truly beautiful in life, you can't keep it to yourself. It needs to be shared or it loses some of its beauty. I knew he was someone I wanted to be with for the rest of my life when I saw a rainbow and the very very first thing I wanted to do was share it with him. In fact, I could hardly enjoy it myself until I did.

I was reminded of this a few days ago. I was off on my alone time (another reason my husband is wonderful and amazing - he insists I go off on my own a couple hours a week to read in a coffee shop or walk around target without kids. Wonderful!) I walked into the parking lot of Panara (my favorite place to sit and read) and there in the sky was a magnificent rainbow. At that very moment I was so very sad that I was alone. I honestly had to stop myself from flagging down all the strangers that passed me, (most of them not even glancing up to the beauty above them) and demanding they LOOK UP! It was one of those rainbows that is so bright you can see all the individual colors. And you just know, if only there was not something in the way, you would be able to see a glimmer of the gold at the end of it.

Now I will admit, I don't cry in movies - but the fact that I could not share my rainbow brought a tear to my eye. Luckily I have a cell phone. In a hurry I text-ed those sitting at home and asked if they could see it too. Oh joy of joys they could! I had been rooted to the spot, unable to move until I could share my rainbow. And un-safe as it may have been I walked into the story backwards so I could watch it as long as possible. I was content. I had shared my rainbow.

Alright - another Alice question for you all (ready Diana?) Did Lewis Carroll create Humpty Dumpty or did the rhyme come first and he simply used the character? Did you all know it was Humpty Dumpty that talked of Un-Birthdays and not the Mad Hatter at all? He even made Alice do the math for him (365 days in a year – 1 birthday = 364 un-birthdays) Yet several re-creations of the story I have seen have given full un-birthday credit to the Mad Hatter. Did you also know that the Mad Hatter and March Hare come back in the second book as Haigha (rhymes with "Mayor") and Hatta the white king's messengers? At least the characters look the same in the illustrations. The things I am learning reading this book! Such as that "Outgrabing" is something between bellowing and whistling, with a kind of sneeze in the middle: however, you'll hear it done, maybe-down in the wood yonder-and when you've heard it you'll be quite content. I bet you all didn't know that!

I apologize dear readers. I am feeling rather chatty today. And when happens, I rarely stay on track and tend to jump around all sorts of places making almost no sense at all. I shall make up for it and show you some pictures of my prima ballerina: 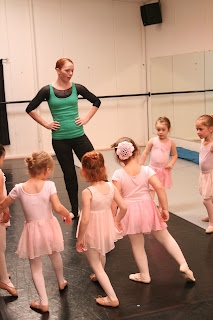 She was sooo excited to go to her first class.  And she did wonderful! 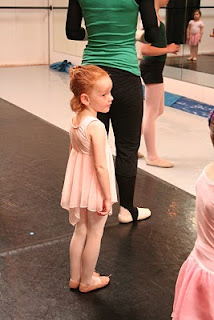 She was 100% comfortable being in the room without me, she did everything they asked her to do and by the end she had several little girls asking to stand by her and putting their arms around her shoulders.  The girl knows how to draws others to her! 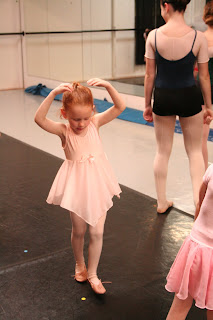 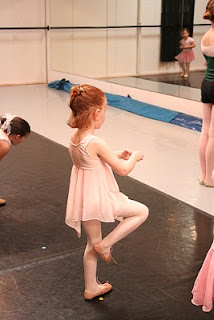 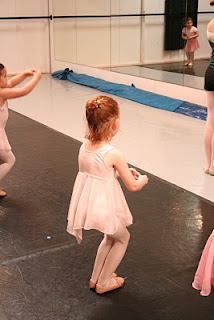 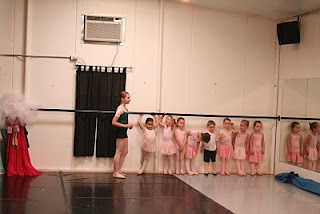 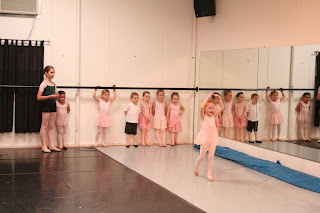 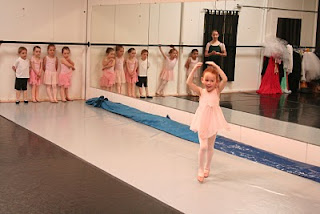 My big four year old ballerina!
She is already counting the days until Monday night again so she can go to class.  I have a feeling Mondays are going to be the new favorite!  She also met a new friend who is going to be starting at her new school with her in the fall.  I was excited about that.  Always nice to have a friend on the first day.  Makes it a little easier - on mom at least!


Ah, I hear drumming.  That can mean only one thing you know - you see:
The lion and the unicorn were fighting for the crown The lion beat the unicorn all around the town.Some gave them white bread, and some gave them brown;Some gave them plum cake and drummed them out of town.
Mmmm, plum cake sounds good!
Posted by SBethuel at 9:26 AM