Of dirt and trees and fairy wings!

We watched 'Song of the South' last night and this quote made me laugh out loud!  How sad most people have such a different attitude.  I don't want to be one of those people.  Kids simply bubble with noise, and while "inside voices" are good things to learn- how wonderful is it to a kid when they are allowed to be as noisy as they were meant to be!    For a moment in time they can break free from the restraints that civilized society has forced upon them and just be kids.  That, I believe is one of the purposes of camping.  That and getting as dirty as you want to and not having to worry about it - or even think twice about it!

I had another post in mind last night, but these pictures have sat on the camera for too long so I felt it was high time they were shared with the world!  I shall write a real post sometime later this week. 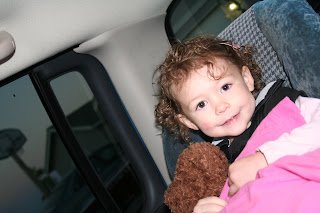 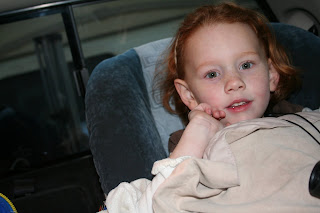 A little sleepy, we left at about 6am.  But she was so excited!  The ride there was an adventure in and of itself.  We went the scenic route so there was much to see and not many places to stop.  Both girls got a little carsick on the twisting roads - for Taylor we were able to stop first...with Ayla we weren't so lucky.  So we got to clean a car seat on the side of the road about 30 miles away from where we were going.  Not my favorite pass-time. 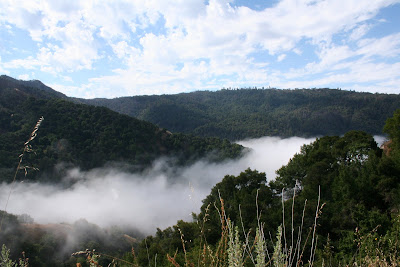 The was our view as we drove up the mountain.  Taylor said it looked like magic.  Daddy said that maybe a dragon lived down there.  She got a little concerned when I said I wanted a dragon for a pet.  "You can only have a nice dragon mama ok?" I reluctantly agreed.  But what is the fun in having a nice dragon!?!

So excited! The campsites were lined with poison oak.  And within an hour Ayla had dashed right into it.  So it was barely noon and she was already on her third set of clothes for the day...sigh...that child! 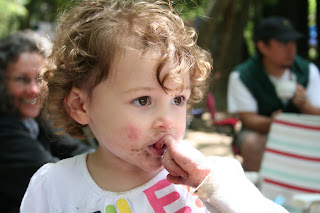 I soon gave up on keeping faces clean.  We were camping after all! 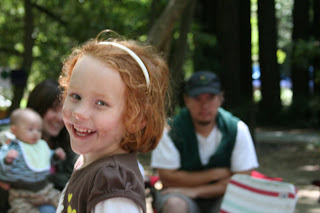 Sooo happy and excited to be there!  Cousins to play with, dirt, trees to climb, dirt, rocks to jump off of, dirt, streams to play in and even more dirt!  Every child's dream. 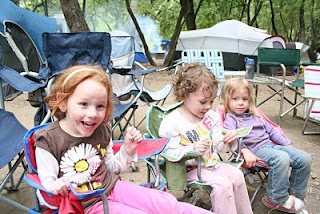 Taylor, Ayla and Maddie.  Three peas in a pod. 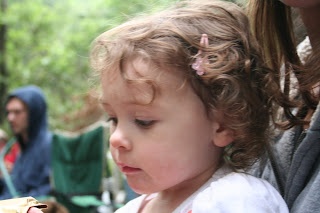 I am pretty sure that barrette will never be seen again. 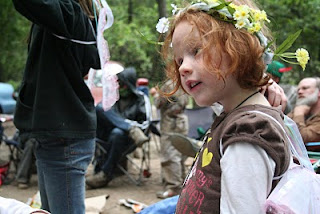 Taylor took it all in like a sponge.  The people, the scenery.  She is an outdoor girl.  However, she did not like the fact that she kept falling down into the dirt.  She fell in the exact same place three times.  Poor girl got more frustrated every time! 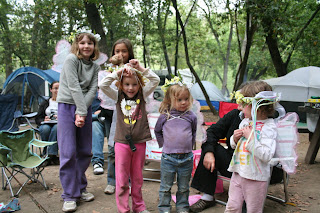 Granny gave fairy wings and flower garlands to each of the girls.  They loved being fairy princesses together! 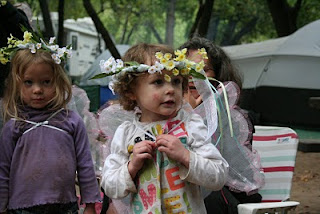 I think Maddie might have been eying the swords the boys got here.  She ended up being a fairy warrior. And a very vicious one at that! 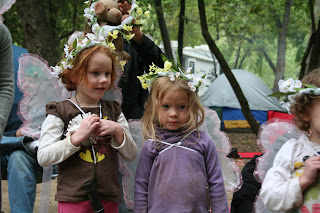 I have lots more pictures.  Perhaps I will post them all on facebook.  But for now I will be selfish and stick to the ones that have my children in them.

We also had time at the beach with the lovely sand dunes I remember so fondly from my childhood.  Of course I had to run down them with my kids.  So much fun still!  Of course many songs were sung and campfires were enjoyed.   All in all in was a lovely time.  Funny how some people you can see perhaps once or twice a year...or once or twice every few years...and still feel just as connected as if you were never apart.  These are real friends.  I am overcome with joy to think of sharing such friendships with my children.  They had such a blast playing with their cousins, and who wouldn't!

Though I did miss one thing.  One very important thing.  Tell me, did I just miss it by chance or did we dare to have an entire midsummer vacation without a pound and a half (or more!) of fudge?!?
Posted by SBethuel at 9:23 AM