Of paper planes and porcupines.

You know that old lady at church? The one that when you first meet her she says "We don't shake hands, we hug around here!"

Yeah, I hate that old lady.

I think it started when I was about a pre-teen. It was then that I discovered I was different. It started when I discovered I hated it when people touched my pillows. I know, weird. But you know as kids you hang out together in bedrooms, that is where your own things are. And I hated it when my friends touched my pillows! (this phobia was slightly less severe then my unusual fear of toothpaste. A phobia I still suffer from.) I could deal with it if it happened. But I didn't like it. Then it morphed into not really wanting to stand to close to people. You know those people that don't seem to have any sense of personal space and you find yourself leaning backwards while talking to them in an attempt to put a little distance between you without being obvious? Yeah there were several of those in my life at the time and it REALLY bothered me. A Beloved friend of mine used to tell me I had a very large and very thick personal space bubble. "Get into Sarah's bubble and you know it!"

I discovered that I emmited a very strong vibe.  A "don't touch me" vibe.  This is one of those fascinating things about humans.  How did everyone know? I never said it, I never acknowledged it. Yet if you spent any time around me you knew it to be so. What drove me insane the most? People that picked up on the vibe, knew it full well and still forced hugs. This is not a big deal to me now.  But as a teenager? I hated you for it. Church High school group youth leaders were the worst. Where does it say in the Bible that everyone has to hug everyone else?!?

Well, time went on and I entered into a world of theatre. Now, those actor types? VERY touchy. I knew friends that would kiss one another on the lips just as a general greeting. One of my friends had a weird biting thing and would regularly grab your arm, bite you and walk away. I think a squeeze on the ass was pretty standard as well. So within that group I was an outcast. I was lucky enough to never land a romantic role...of course with the whole "don't touch me vibe" that may have been the decision of my directors.  "No one will believe her anyway, just put her in the funny role!" Ok so I wasn't a great actor.

A while ago I read an article. My eyes went up in shock as I read this . You mean I am not alone!?! I cannot tell you how wonderful it was. For so long I had been this way, but never really thought it all out. I just knew this made me uncomfortable and everyone else seemed so ok with it. It felt great to get my prejudices out in the open.

I have a very dear friend. She and I were recently talking. We were laughing over how we two had been so very similar our whole lives. As an example of this we both spoke of our hatred of the standard hugging. She laughed and shared a story of herself years ago. As a part of a church group there was a poor gentleman who wanted to make her acquaintance on a more-then-friendship level. Whether it was coincidence or not she came to his house once for a group meeting to discover it was only the both of them. Knowing he had had his eye on her for a while she found herself in the moment of awkwardness. To hug or not to hug? This is a church thing after all, doesn't that mean we HAVE to hug? But being alone in his house the moment was feeling not right in her head. Sensing her uneasiness he stated the ever popular "I'm just a huggy person" to which she replied (and correct me if I did not get this phrase exactly right) "I'm just a prickly porcupine kind of person."

Yes! That explains me exactly. I am a porcupine! I bet in the world of porcupines no one feels like they have to hug one another just to be culturally accepted.

Now I would like to enter in here that this fear of personal connections does not apply to my husband and children.  I love their hugs more then I can say.  It is the feeling as if I have to hug someone to maintain personal dignity that I hate. And to be even more ironic if my above mentioned friend were to walk in my door right now the first thing I would do is run over to her and give her a hug. As she would me.

Perhaps it is not just the feeling compelled (though my natural rebellion does play a part in this) It is that I only really like giving hugs to people I love. I don't love the old lady that I just met 12 seconds ago. I don't love the creepy guy trying to unsuccessfully lure me alone into his apartment. Ok, so I'm sure that was not the intent. I don't love acquaintances that I see occasionally. I will hug those that I love, family and beloved friends...if they want me too. It doesn't bother me. I even want to on occasion. But I just don't see hugging as requirement for friendship. I can be your friend without all the awkwardness. Right? Ok, maybe this is all just me and I need to get over it already.

Though I will say one thing: Please, if I don't hug you do not take offense. I honestly don't think about it. So I am not trying to avoid you, it is just not my normal way of interacting with someone. Just as I do not automatically smack someone on the behind every time I meet them. Heehee, wouldn't that be great:

"We don't shake hands here at this church, we smack behinds!" Now that would be an awesome church!

And just to be clear, this post has absolutely nothing to do with paper airplanes. I just liked how it sounded. 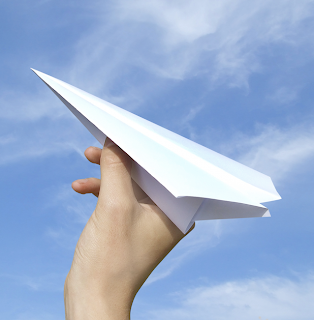