I spent some time recently reading some of my old posts, do you know that I have almost 200 of them?  My first ever post on this blog was in August of 2009.  Since then life has twisted and turned, morphing between starts and ends and all the in-between.  I've gone from life with a baby and a toddler to having a child in middle school and two others not far behind.

There are times that I feel old, so much older than I should.  I know I may look back on that phrase someday and laugh at how foolish I sound, but I hope that I can at least appreciate that it was my way to label a feeling that otherwise would have no name, and that if it does not end up resembling what it feels like to truly be old, that does not take away from the here and the now.

Other days I feel so very, very young. Way to young to have a child that is on the cusp of teenage-hood and two others close behind.  Far to young to own a house, two cars and sensible shoes. Far to young to be the one in charge of so very much...but on the other hand, I can do it and I do it well, so perhaps I am not so young after all?

I do find that I rebel against being a grown-up in odd ways, for instance if you visit my house, I highly recommend that you read the magazines in my guest bathroom. I promise, you wont be disappointed.  I also may have partially bought this house just because it had a hidden room under the stairs, all the best houses do you know.

When I was a teenager, I was often told that I was wise for my age, that I had things more together than other kids my age (whatever that means), that I viewed the world a little more realistically - and I took that to heart. It was incorrect of course, but I still molded it into my identity and flaunted my superior knowledge of the world and all its ways.

I had kids way before most of my friends, so through my twenties I was the one to call with questions of tiny kids and the ways of sleepless nights and toddler tantrums; not because I knew anything special, but simply because I was a few years ahead of most of those around me and tended to read books and research methods until I was blue in the face.  I was honest in my struggles and was able to string a bunch of words together in a way that was interesting to read, and so I was praised for my motherly wisdom and I accepted that. I wrapped it into who I was, because honestly if I did not throw myself wholly into the whole mother-of-small-children thing, I would not have survived it.

It is funny how this whole age things works.I have been praised for my wisdom at various points in my life, and now as I look back fondly on it all -  I can only laugh at how truly foolish I was through it all.  I feel right now that I am at the cusp of realizing the depth of my foolishness, and oh it is freeing! 35 feels very middle in many ways, perhaps it is the whole "two-score and ten" thing - and I am about to arrive at the very middle of being 35.  I wonder, if the accumulation of wisdom will reverse itself now?

I started as a teen, convinced I truly was smarter than everyone else around me.  As time passed, I grew more and more into the knowledge that I was foolish, and now at 35, I feel perhaps the least wise I have ever been, and I am truly happier and more at peace than I have ever been. So once I have passed 35, will I slowly start to collect actual real wisdom until eventually I can honestly call myself wise?  Or will the knowledge of my own foolishness continue to grow until that, in and of itself, creates one who is humble, willing to learn from every being I come across until finally, once I am truly secure in all that I do not know, I will finally begin to understand knowledge?

I went for a walk yesterday, I shouldn't have, it was foolish - but the outdoors called me in a way I could not resist. The wind was blowing, hard.  I think we topped out at around 50-60mph.  The sky was a haze of dust, the ground was littered with fallen branches and leaves. The trees, old and gnarled were being torn to pieces and I was called irresistibly into the midst of it. 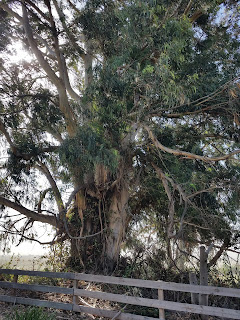 It was not wise to go for a walk in a wind, but I have braved trees falling down about me before and lived to tell the tale.  Twice while I was out walking, I was driven into the street by my own survival instinct, as the wind tore into the branches of the massive trees above me.

This wind was a mad wind, there was no discernible pattern, no predictability.  It would die out for a moment, leaving the world eerily still, only to whip up in a frenzy, ripping leaves from branches and forcing the un-prepared to cover their eyes and face to avoid being swept up in the midst of it all. 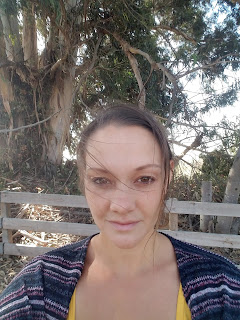 I walked for over 3 miles.  I felt like I was in a dream, the wind was alive, perhaps even more so than I was.  It was alive and it was not tame, it did not care for my well-being or my comfort. It would blow where it willed and all that was in the way would pay the price.  The world has different rules in the wind, and I think that all living things can sense that.  Crows would not run away as I walked by, but would simply cock their heads and watch me. I saw lizards, buzzards, birds and bugs and found myself almost expecting them to speak, perhaps they felt the same way about me? Somehow we all knew that the rules were different in the wind.

I saw only two other humans on the whole path, a way that is usually speckled with dog walkers, mothers with strollers and retired folks taking a leisurely morning stroll.  One person, I saw early was walking two small dogs and wrapped up against the wind as tight as they could be, wearing a dust mask over their mouth and nose.  They waved sheepishly as I walked past, muttering something about the outfit likely being overkill.

The second person I saw twice, once on my way there and then again as I walked back.  They gave me a nod as we passed both times, a moment of eye contact that said "ah! So you too were called into the wind." They were a stranger, but our souls seemed to recognize one another.  We were both foolishly walking in the wind after all, no truly wise person does that.

Several times as I walked I was stopped in my tracks at the beauty and the wildness of the world. There were patterns, textures, colors that I had never seen before.  I must have sat in awe for a full five minutes, not moving and watching the pepper field below my walking path sparkle in the sun and the wind, leaves pulled back and forth creating a beautiful chaos of light and color. 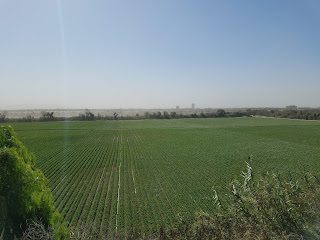 Once upon a time, I was a wise person.  I don't think I am anymore.  But, perhaps for the first time in my adult life, I am at peace. I can see the value of insanity, the wisdom of being foolish, I recognize the deep beauty in the dust covered trees.  I love the quiet, the solitude that I once feared and even hated, has become a close and personal friend.

I hope I become more foolish as I age. I think we could all do with a little more foolishness every so often.  Because, you see - there are different rules in the wind, it sweeps a weary soul clean of dust and cobwebs. We could all use a good soul sweeping now and again.