Because you matter to me...


I never stop writing.  You just don't always get to see what I write.

Sometimes you don't get to see it because it is too deeply personal and honestly, none of your business.  Sometimes I bury it because it is too controversial and for some reason, I feel the need to protect those that would disagree with me by not sharing - which probably says more about me than them. I find I am becoming more Aaron Burr-like as I age ("Talk less, smile more, don't let them know what you're against or what you're for.") I think it can be a good thing sometimes. Other times it feels cowardly of me, like my ideas must not be worthy of scrutiny, or I doubt their ability to hold up in debate. So I chicken out, preferring to keep my own views private, all while watching the world burn around me.

Sometimes you don't see it because it's un-polished, un-finished or I've said it a hundred times already. I repeat myself in this blog a lot, I notice that more and more as Facebook shows me "time-hop" posts that almost always say the same thing, day after day.

Sometimes you don't see it because the posts are too sad, or angry, or too scattered and jumbled, a mess of words and ideas with no perceivable goal. 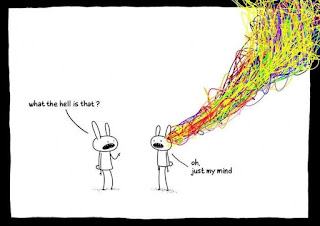 I don't get much out of writing when no eyes but mine ever see it, I am a public writer.  Anything I have written that never gets to breath real air never truly lives for me.  It stays paper and ink, a shadow of what it could be. Sometimes, honestly, that is where it belongs.

I think I've mentioned before, that contrary to the (self-proclaimed) majority of people on social media, I love reading political/controversial posts, from all sides. 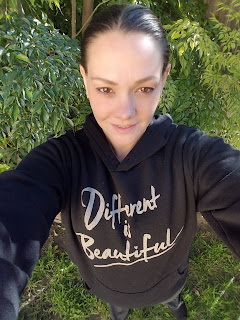 I love seeing strong opinions presented, passionate rebuttals and well researched debates.  I love watching and listening to people that care deeply, defending what they love. Those that feel the compulsion to argue, even when they know they are the minority, even when they know that what they say will make absolutely zero difference in the minds of those they fight against. But they must speak, or they will fly apart.

I love hearing the resolve in the voices of those that believe beyond a shadow of a doubt that they are right, even when the evidence against their claim is piled a mile high. I am entertained by the ignorance, I am fascinated by the idiocy, I am blown away by the stubbornness. It is so incredibly human it makes me want to laugh out loud in glee.  I am fascinated over and over again by humans, by minds, by belief, by the power of family, of habit, of religion and community and how it all shapes us. I smile every time someone goes against the grain no matter the direction, because the pull of "how we are raised" can be so incredibly powerful, and it takes a completely different kind of strength to stand up against that.

I am in awe of the greatness of education, its power and what it does for the human brain. I stand equally in awe of the freedom that ignorance can give the mind, unhindered by previously decided limits, free to think beyond boundaries. I marvel at the questions asked by those that truly want a real and unadulterated answer - and at those bold enough to ask them.

Because you see, you matter.  Your thoughts, your words, your ideas, your humanity. It all matters. I don't think we get told that enough.  So let me say it, and for a moment just listen: YOU - individual you.  You matter.

I love hearing from people that are talented in presentation.  Those that can speak so eloquently that before the eyes of the anxious listener, a tapestry of literary strength, ideas and belief simply appears, seemingly without any effort at all. I love hearing from those that know exactly what they want to say, but stumble, falter and stutter their way through it, the passion evident, the word-smithing not so much...

I love it all.

This is humanity, this is freedom of speech, this is how we learn, how we grow, how we evolve.
I can't look away, I could spend all day just watching. I can't explain why I love it so much, I simply do. I absolutely love the fact that my kids get to grow up in a world where they have so much knowledge at their fingertips - that we all get to live in this world!

Am I alone in this? I'm really asking here. Because so many people complain about the political atmosphere of social media and the world as a whole right now, as if it is a bad thing. But then no one seems to really be stopping their tirades...  I don't think people can physically stop. 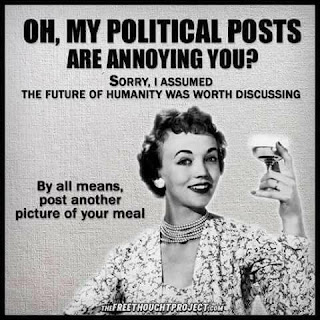 Ok - now I'm just stirring up trouble. Which I also love to watch by the way...

I think if nothing else, these last few months have proven that humanity is not by nature, an indifferent breed, and I think that is a good thing. Because indifference means that no one cares enough to get excited about anything.  No one believes in anything strongly enough to fight for their own perceived truth, their own perceived goodness, for fairness and equality. These are important things, and we have people in all walks of life fighting for them, despite being told to just sit down and shut up already.  Indifference means we sit back and live life not caring about those around us - shutting it all out and simply taking care of our own basic needs, not caring so long as it does not directly affect us or those closest to us.

We want to matter. We want our lives, our opinions, our hopes and our dreams. We need it to matter, to someone.

Deep down, even those asking, begging for all of us to "just get along" I don't think they want to live in an indifferent world. And I have a feeling that at the moment, indifference is our alternative.  Sure, respect and general manners are important too - but these issues go beyond that. They are too deep, too raw, too human.

And I think that is fantastic.

I've mentioned before my obsession with the musical "Waitress."  The story is hard, it is not pretty. The show is about someone who is stuck in a life that is damaging to her because of choices she made when she was younger. Throughout the story, many hard things happen (as they do in stories, and in life) most of it the direct result of choices made both intentionally and unintentionally. She crosses some moral lines and eventually comes to the conclusion that if she can make easy choices that result in what she does not want, she can also make hard choices for what she does want. In short, she wants to matter. It is messy, people get hurt – innocent people even. But in the end, she is free. And in this particular story, when she is in the midst of all the pain and heartache, baking pies is what keeps her grounded. She pours her energy, her pain, her hopes and dreams into baking.

Now, I don't bake pies, but I do bake bread. And I would do it all day, every day if I could. Next to writing, it is one of my very favorite things to do. So I understand the need to be covered in flour with dough under my fingernails. She creates pies that represent her chaotic world, like “deep-shit blueberry bacon” or “the dark, dark chocolate pie.”

Anyway...all that to say, the show has lots of layers, lots of meaning, while at the same time being incredible simple, incredibly human. It shows the damage indifference can cause and the cuts and bruises that we get when we stand for what we believe to be right, when we decide that our voice is worth being heard. And through-out all of it, the question is asked: is all that pain, all those scars, are they worth it in the end?

It can feel like a hard question to answer, especially when we are buried up to our eyeballs in "deep-shit blueberry bacon."

So i'm going to simplify it for you.

You matter. Simple and plain, you matter.


It's addictive the minute you let yourself think

And for the first time I think I'd consider the stay


Right now, in this moment. You matter.

You see, I never stop writing. I can't. You just don't always get to see what I write.

Sometimes you don't get to see it because it is too deeply personal, sometimes I bury it because it is too controversial and for some reason I feel the need to protect those that would disagree with me by not sharing.  I think this may be something I need to work on changing.  Because we need deeply personal, we need controversial, we need to know that the things that we say, matter to someone. We need to be raw, we need to be everything but indifferent. We need to know that the cuts and bruises we get from taking a stand are worth it, that in the end it is all battle scars and stories - and that it mattered.

Simple and plain and not much to ask from somebody


You matter to me


I promise you do, you